To: The Sycophants of Australian Globalist Institutionalised Fake News – GIFN in the wake of their hypocritical and opportunistic politicisation of the terrible Wieambilla police shootings 260 kilometres (160 miles) west-north-west of Brisbane Queensland Australia.

Posted on 17 December 2022 by Vince Barwinski

Before I lead into the tragic event at Wieambilla on December 12, 2022, my opening question to you is:

“Can you explain to me why a Holocaust survivor would have her interview on YouTube taken down?”

Indeed, does that not make the censors at YouTube a pack of far-right extremists? And does not the peddling of Dangerous, Ineffective, Expensive – D.I.E. Experimental Big Pharma jabs by yourselves and government, violating the Nuremberg Code and far more likely to kill our children than the virus itself, in a neo-embodiment of the worship of the Canaanite God of child sacrifice Molech, make you Fascists? Perhaps the Auschwitz Angel of Death – Doctor Josef Mengele, of which twin children were his favourite subjects, would be proud of you? Moreover, as indeed Benito Mussolini himself would attest to:

“Fascism should more appropriately be called Corporatism because it is a merger of state and corporate power.”

Furthermore, I am of course aware by the standards of your servile Globalist hypocrisy, I would be a far-right extremist. However, after years of studying Communism and National Socialism, and viewing with my own eyes, almost two metric tons of human hair at the Auschwitz Concentration Camp Museum in Poland in mid-2005, I do not require an agenda driven and supine pack Globalist media, such as yourselves, masquerading as diverse free media, telling me what is and what is not far-right.

With the true nature of the global ideological battlefield now summarised, it’s time to address the horrific shoot-out at Wieambilla. Whereupon, as your pro-D.I.E.-jab Nuremberg Code violating Globalist narrative crumbles, you deemed it was necessary to politicise the fact that the shooters who had legitimate concerns with the Nuremberg Code violating D.I.E. experimental jabs, was to be justification of blanket condemnation of anti-D.I.E.-COVID–jabbers in general.

However, upon embarking on this blanket assertion of rabid leftist hypocrisy, given how you do admittedly and rightly condemn anyone who says “all Muslims are extremists” whenever Islamic terrorists commit atrocities, but on the other hand, you resort to blanket assumptions of anti-D.I.E.-jabbers with more than legitimate concerns in regard to the D.I.E. Nuremberg Code violating experimental jabs, one has to ask you the burning, symbolic and pertinent question;

“Do you think the Holocaust survivor Vera Sharav is a far-right extremist for condemning the Big Pharma D.I.E. Nuremberg Code violating experimental jabs?”

“Senator Ron Johnson and brave pre-COVID world renowned dissident doctors when they recently met in Washington DC and called out the D.I.E. Nuremberg Code violating experimental jabs and their association to the growing excess deaths globally?”

Moreover, when we cast our minds back to the 2020 radical-left American Summer riots when Antifa and radical-left Freedom Road Socialist Organisation rioters were running rampant around the country, do you recall, or forget like your incognisant, blithering, feckless and fraudulently elected idol Creepy Sleepy president Joe Biden would surely do, when your incessant catch cry was:

Ever since the peaceful anti-jab Canadian Truckers protested against the Nuremberg Code violating D.I.E. experimental jabs mandates back in February 2022, or freedom protests globally in relation to the enforcement of any socially destructive and economic wrecking ball COVID-19 lockdowns, that slogan of yours seems to have been discarded for the time being at least, from your leftist agenda-driven play book of hypocrisy.

Moreover, you insist on calling the Nuremberg Code violating- D.I.E.-experimental jabs “vaccines.” However, given that the original definition of:

“A product that stimulates a person’s immune system to produce immunity to a specific disease, protecting the person from that disease.” [Thank goodness for the good old WayBack Machine!]

to merely a cop-out narrative crumbling definition of:

“A preparation that is used to stimulate the body’s immune response against diseases.”

… how can you indeed call us anti-vaxers? At least in regard to the Nuremberg Code violating D.I.E. experimental COVID-19 jabs?? 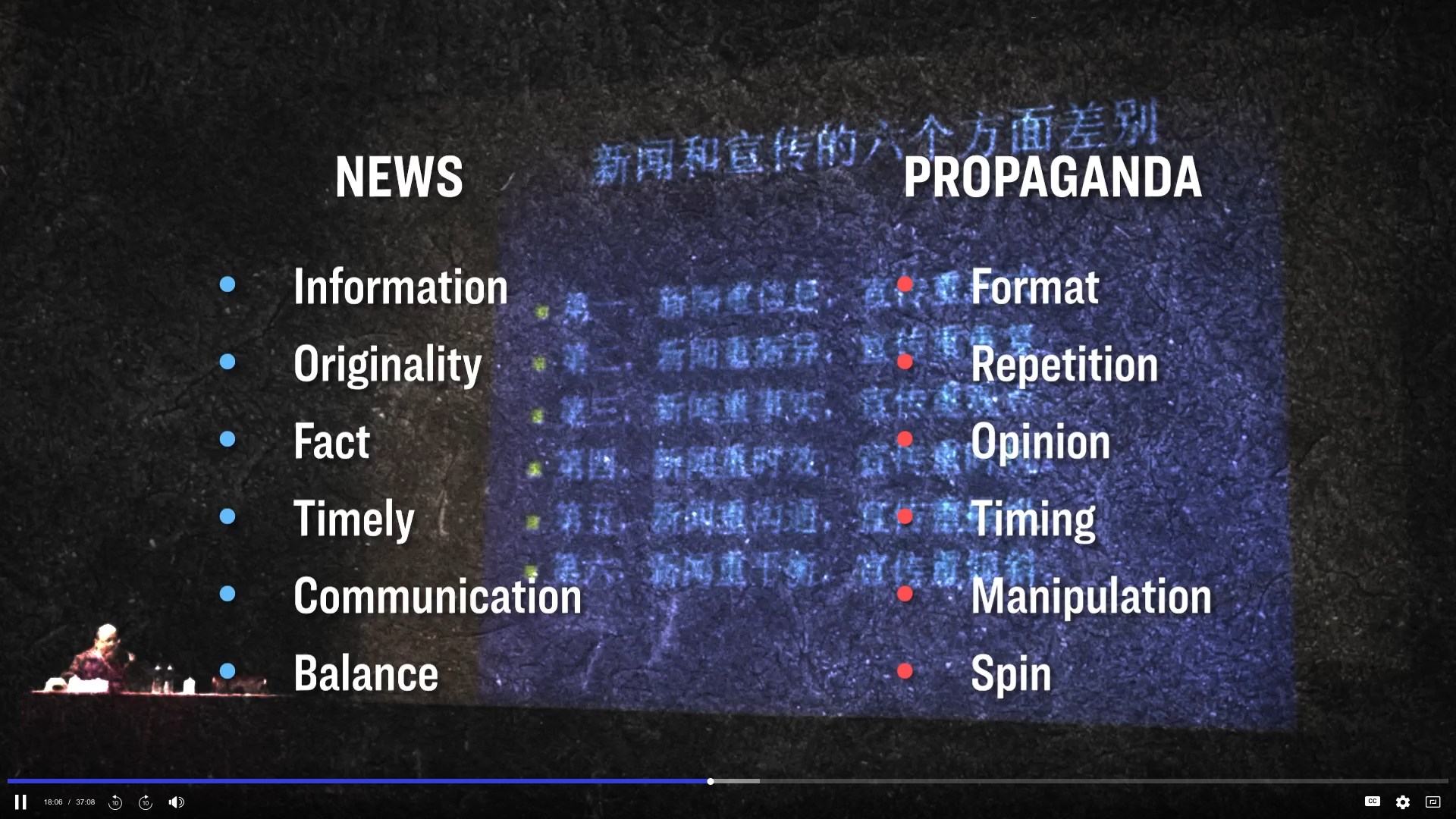 The “Walking Dead”  that are the mass-murdering and genocidal CCP – Chinese Communist Party, which as far as I could tell throughout 2020, you had no interest in ever criticising in their nefarious role in the COVID-19 pLandemic and its cover-up, in ostensible fear of appearing “racist,” has no interest in the true spirit of investigative journalism. Rather, they are only concerned in delivering “news” subservient to the line of the party with a seven decades long history drenched in genocide, terror and oppression. Indeed, like the Globalist apparatus you indeed serve, headed by Klaus Schwab, [See the footnote at the end] investigative journalists are a threat, but propagandists, as indeed you yourselves have become, are the indispensable, compliant and obsequious tools to foster and preserve tyranny – such as your still obsequious subservience to the crumbling Nuremberg Code violating pro-COVID-19-jab narrative.

Furthermore, your false reporting of Ivermectin as just a horse drug, when in fact, it is a multifaceted and now non-patented drug of Nobel prize-honoured distinction with indicated efficacy against the scourge that became known as COVID-19 – the CCP-Fauci-Daszak-GOF Virus. The latter and truly origin-descriptive term of which, implying the fact that purveyors of disease, such as Anthony Fauci, will always attempt to flog the “cure.”

Moreover, in again referencing this term, but in this instance, to the no less self-serving Peter Daszak from the EcoHealth Alliance, when he stated the following way back on March 27, 2015. [Yes, March 27, 2015]:

“Daszak reiterated that, until an infectious disease crisis is very real, present, and at an emergency threshold, it is often largely ignored. To sustain the funding base beyond the crisis, he said, we need to increase public understanding of the need for MCMs (Medical Counter Measures) such as a pan-influenza or pan-coronavirus vaccine. A key driver is the media, and the economics follow the hype. We need to use that hype to our advantage to get to the real issues. Investors will respond if they see profit at the end of process, Daszak stated.” 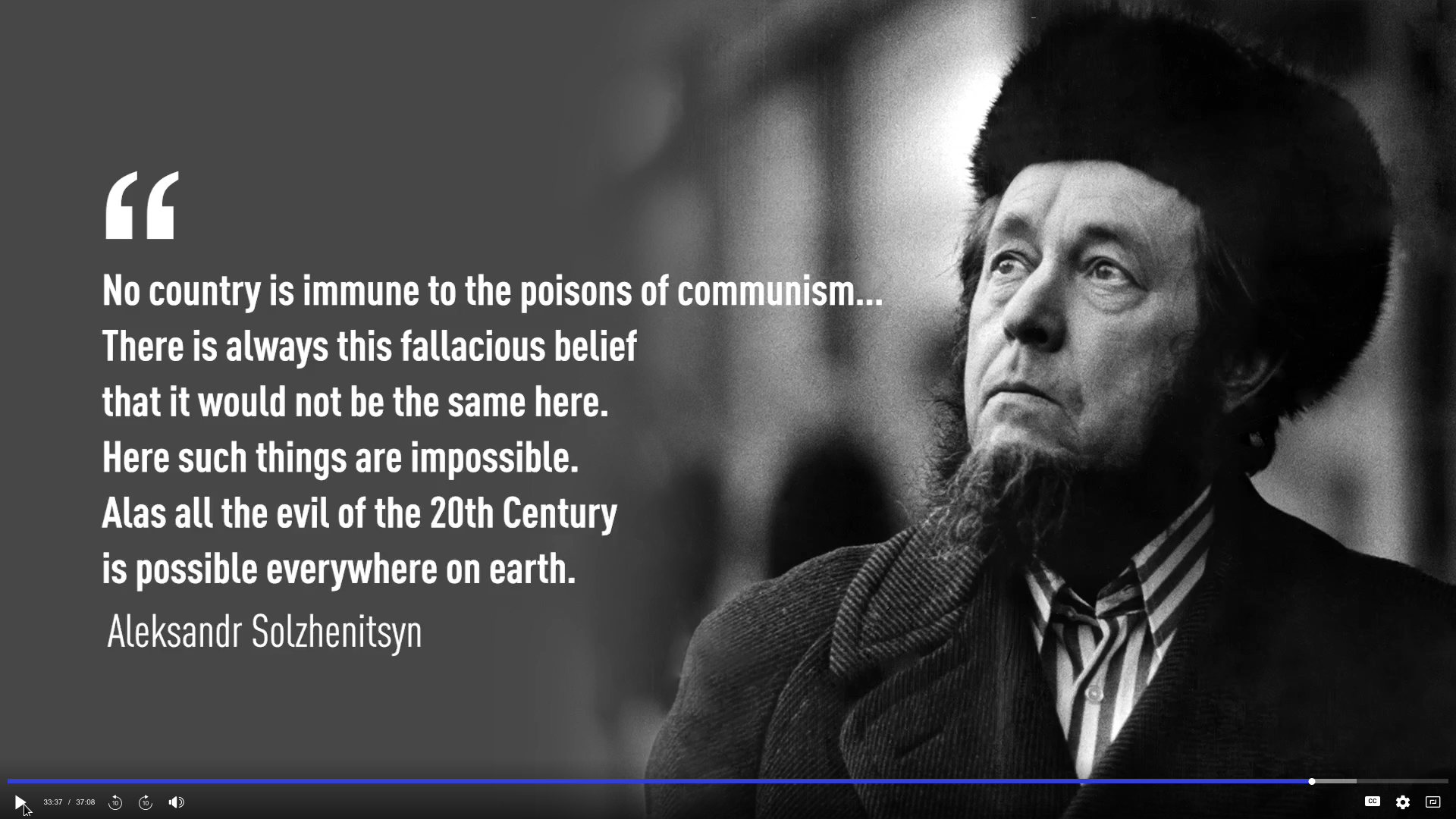 Have you read Alexandr Solzhenitsyn’s Gulag Archipelago? If not, you should! And to reiterate, just as investigative journalists are a threat to the CCP, propagandists, as indeed you yourselves have become, were likewise indispensable to the tyranny of the Soviet Empire. To paraphrase this theme, you lot have become compliant and obsequious tools to foster and preserve tyranny – such as, to again reiterate, your still obsequious subservience to the crumbling Nuremberg Code violating pro-COVID-19-jab narrative – a quintessential modern-day vindication of Alexandr Solzhenitsyn. Think I am confusing National Socialism with Marxism? Well, never forget the “Socialism” in National Socialism which Klaus Schwab has transformed into International Socialism => Globalism. [See the footnote at the end]

And finally……how many jabs will it take before you finally wake up – 5, 10, 15, 20, 25?? Personally, rather than trusting a scandal riddled Pfizer, I will always trust my natural immunity, as yours declines with every jab – as indicated with the aforementioned rising toll globally of excess deaths. Moreover, the tragic event at Wieambilla, in spite of your most nefariously best efforts of deceit, duplicity and deception, will ultimately, refuse to prop-up your crumbling pro-DIE-Experimental and Nuremberg Code Violating jab narrative.

This will be due to so many questions that pertain to your rabid and inexorable hypocrisy, as you portray yourselves as ostensible oracles of truth, but in fact, are the obsequious and duplicitous servile sycophants of Globalist sociopathic overlords, dedicated to the destruction of Western Civilisation and its synonymous open market place of ideas. Upon which bad ideas perish, and good prevail in the pursuit of truth – not nefarious agendas such as of yourselves and your Globalist overlords.1

After all, rather than journalism, that is what you obsequious servile sycophants to the Globalist agenda of Klaus Schwab and co, unashamedly do best! [See the footnote]

1 The Executive Chair of the World Economic Forum – WEF; Klaus Schwab since its inception in 1971 as the European Management Forum, which was renamed the WEF in 1987, was born on March 30th 1938 in Ravensburg Germany near the Swiss border. He was a life-long protege of Henry Kissinger and his father Eugen was managing director of the Swiss company Escher-Wyss, which used slave labour and Allied prisoners of war, as well as producing key technologies for the production of atomic bombs for Adolf Hitler. See https://americans4innovation.blogspot.com/2021/03/klaus-schwab-is-great-barker-of-fourth.html#world-economic-forum-uncovered and https://www.archives.gov/research/holocaust/finding-aid/military/rg-226-3h.html. The Wikipedia article at https://en.wikipedia.org/wiki/Klaus_Schwab states that Klaus’ birth mother was Erika Epprecht, but this is a lie. His biological mother was the Jewess Emma Kilian who abandoned Klaus on December 9th 1938 fleeing to New York about one month following Reichskristallnacht – National Night of Broken Glass when Jewish businesses and establishments were vandalised all over Germany. The genealogical data for Emma Kilan proving her as the biological mother of Klaus Schwab is at https://www.geni.com/people/Emma-Gisela-Schwab/6000000180094880839. In short, it seems you are beholden to a child of National Socialism – of whom, with Satanic like zeal, has dedicated his life to the inexorable encroachment of big government into every aspect of our lives. Thus embodied in an Orwellian-like dystopian trinity of Marxism, Fascism and Crony Capitalism – the latter Schwab refers to as “Stakeholder Capitalism,” to enable the destruction of our fundamental liberties and freedoms imperative to the very existence of our Western Civilisation. As the Holocaust survivor Vera Sharav eerily elucidated: Germany lost the Second World – but not the Nazis! [From 1:11:55 – See also Operation Paperclip]

McGill university’s undisclosed conflict of interest with Pfizer.
To: Rosie of SBS Australia Complaints Department to elaborate upon my previous BLOG post on the Wieambilla shootings